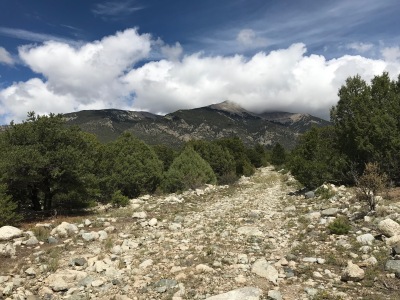 Last weekend, my husband Peyton and I flew to Denver for a special occasion. I had reserved a small SUV rental, knowing where we were ultimately headed—south past Colorado Springs and Pueblo, then west to the small town of Alamosa, and really, finally, to the Sangre de Christo Mountains, where several 14,000 foot plus peaks rise so high toward the sky they seem to touch it. Because I had visited once before, I remembered that they are accessible only by dirt roads that turn into rocky roads that turn into bouldered roads. Specifically, we were going to visit Little Bear Peak, where my big brother fell from the top to his death ten years ago this Labor Day.

Standing in the line of dozens of other customers snaking through stanchions at Budget Rent a Car, I cursed David aloud for dying on a holiday weekend. But when we finally walked through rows and rows of parked cars in their enormous lot to find the number we had been assigned, I gasped and then laughed out loud when I saw the Subaru Cross Trek that we were about to set out in, as it was brilliant orange.

The day a decade ago that my brother set out to climb not one, but three, 14ers, he had ridden his mountain bike to the foot of the mountains—a bike this exact shade of orange—before he continued on foot. At his memorial service, his adventure racing teammates handed out bracelets in this shade of orange. When I recently read The Bright Hour by Nina Riggs, I was especially moved by this passage: Death sits near each one of us at every turn. Sometimes we are too aware, but mostly we push it away. Sometimes it looks exactly like life. Orange: The colors of the sky are the same when the sun rises as when it disappears. The Sangre de Christos (Blood of Christ) are named such because of the reddish-orange hue they reflect at sunrise and sunset. At moments like this, it’s easy to think everything is a sign, but if there was a “signature color” for David’s death, it was this unapologetically bright orange.

Peyton and I stayed in a cozy log cabin where we kept the mountains in our view. We visited several spots there over three days: Zapata Falls, a sweet, cold waterfall that splashes through a broken seam in the side of the range; the surreal desert landscape of Great Sand Dunes National Park; Blanca Wetlands, whose pools were parched to white mineral beds after a drought-filled year; the Alamosa Wildlife Refuge, where we watched two teenage elks bound through cattails. And on the actual anniversary of his fatal fall, September 3, we drove as far as we could toward Little Bear and then ditched the Subaru among the scrub pines and sage brush to hike.

We have never been and will never be anywhere close to as fit as my brother and his teammates, and we weren’t about to pretend we could go terribly far. But even with just a bit of effort, we reached a high spot that provided an excellent view both up the mountain and down it, across the San Luis Valley below. There, we built a small cairn and released a parcel of my brother’s ashes I had been clutching all these years. Peyton and I sat on the rocks, looking out meditatively, not talking, and I remembered Robert MacFarlane’s exceedingly helpful quote from Mountains of the Mind, one of the books that mattered most to me after David’s accident: Ask any mountaineer why we do it—we do it for the perspicuity. The perspective was indeed profound.

Our trip was not a vacation from grief, but rather, toward it. I did have a vacation from work, after all, to visit my grief, like visiting any relative or favorite place. Not a traditional vacation for sure, though I thank David for dying in such a magnificent spot, challenging though it is to locate in its remoteness. Going there to honor him required a sense of adventure on our part—something he, in his intense drive to experience as much of nature’s beauty as possible, would have appreciated. We would never have seen this exquisite piece of the world if it were not for his death there.

In processing the loss of my beloved brother, I’ve always moved toward the grief rather than away from it—like driving toward that behemoth mountain, unafraid, though in awe, of its largess. Allowing it room in my life despite the space it takes up, honoring it for what it has taught me, owning the way it changed me, making peace with it, knowing it isn’t going away.