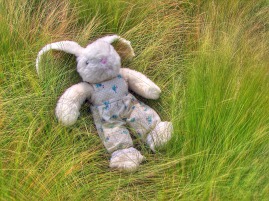 Today I read a story in a back issue of Creative Nonfiction magazine by Brenda Miller that revolved around the National Toy Hall of Fame (who knew such a thing existed?). Though Miller wrote about all kinds of memorable toys—Etch a Sketch, slinky, Legos, and the like—there was a significant focus on dolls, as they seem to have played a big role in her childhood. I loathed dolls, with their tacky pale plastic skin and creepy eyes staring into space that opened and closed depending on the tilt of their bodies. This essay kept me rapt in that voyeuristic way that some stories do because we want to peep into a different world or because what we find objectionable can also be sort of appealing. But at the end, I wasn’t sure she really liked dolls either.

Miller described a complex association with baby dolls and Barbies as well as a doll that she mis-remembered (in that mystical way that specific things were lodged into our developing brains wrongly, for a variety of reasons) as a nurse even though it was a bride. (More than just because of the white uniform, the confusion happened because this author wanted “a doll with purpose beyond pleasing her man,” which I totally got.) And Miller’s mother appeared responsible for the influx of these toys in her young life, imbuing the dolls with a great deal of gendered ideals and expectations, largely traditional, largely met with a lack of enthusiasm, at best.

What struck me most about this inquisition was the line she quoted about how baby dolls supposedly instill parental roles in children. I laughed, thinking of myself. The way I had rejected dolls as a kid (rudely even, when presented as gifts), had been mirrored precisely in my decision as an adult not to have babies. (Not to mention how, other than the song on the Free to be You and Me record that all us 70s kids grew up listening to, I never heard of a boy playing with a doll, so they obviously meant instilling mothering roles.)

As little girls, Miller and I both went nontraditional directions: she didn’t eschew the doll, but decided that rather than her “baby,” it was the little sister she always longed for. In lieu of practically any other toys, I always wanted stuffed animals. I wanted them tucked into bed with me. I wanted to take them on trips. My dad referred to them as my “friends.” When my future husband and I (who both grew up in homes jammed with furry creatures) first went apartment hunting together, it was imperative that we find a place that accepted pets. A few years later, I started volunteering at a local humane society. And look at who I parent now: five cats and two dogs.

That made me think, at first, that maybe our nurturing selves are created more by natural tendency or home environment than the toys that are thrust into our tiny hands. I thought a lot about gender: how apparently boys really are often automatically drawn to trucks and trains, so maybe it wouldn’t make any difference if we handed them a baby doll. Any why do most kids—boys and girls—like stuffed animals? I mean, they are the best and most cuddly toys, in my opinion. But we don’t all end up with personal zoos the way I did. Maybe there is no correlation at all.

Then my brain hung up on the author’s name: Brenda Miller, Brenda Miller—why do I know it? (Quick Google search.) Photo: a friendly-looking, bespectacled woman with her dog? Waitaminute. After penning a short piece about my pup in grad school, my professor said, “You should read Blessing of the Animals.” Guess who wrote that? Yep. Brenda Miller. I remember had to order a used copy, because it’s out of print. I remember that the title essay was the first thing I ever read that made me feel it wasn’t saccharine or ridiculous to want to tell stories about loving animals. About parenting animals, no less.

Her bio: Brenda lives in Bellingham, WA, with her dog Abbe and many foster dogs who find temporary shelter with her through Happy Tails Happy Homes.

Turns out all this musing was really to figure out that Miller and I have a lot more in common than a love of creative nonfiction. We’re practically soul mates!

I bet her mother isn’t thrilled about any of this. But I am.